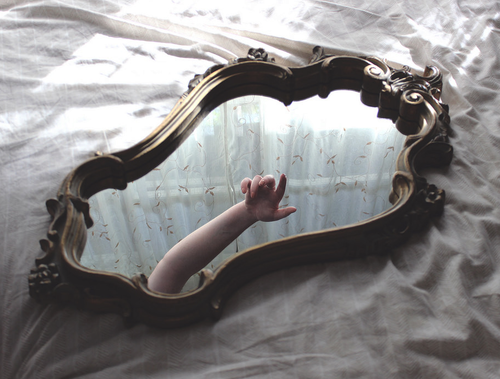 A Small Measure of Peace

She touched the glass of the picture frame with her index finger, holding her tattered letters in the palm of her other hand. She wondered if he were doing the same – glancing at her through a clear pane of melted sand from a faraway land.

It was as if she herself were stuck in quicksand – moving too fast to stop sinking, with no branch to grasp onto. The darkness was getting closer as the days since she last lay eyes on him grew larger in number. Sometimes she sits like this, eyes on the horizon, searching for a familiar silhouette.

The letters felt soft in her hand, pliable like supple leather from constant exposure to the oils in her fingers and the salty residue that leaked from her eyes. She no longer could read the words written in sloppy handwriting – remnants of a hand she likely would never hold again. But she didn’t need to read them anymore; she knew them by heart.

The sky was an eerie grey – devoid of any colour that may have warmed her sunken face and brittle bones. As she sat on the veranda, she could not make out the shapes in the sky they used to spot together. Only large globs of dirty cotton balls streaked the vast expanse – devoid of any shapes borne from creativity and excitement. She knew only the grayness now.

The picture frame she held was of oakwood, encasing the colour photo within its textured borders. She kept tracing his features – an index finger roaming the lines and crevices of his face as if it would rub the photo to life.

His voice inside her head brought a tiny smile to her face, until she found that his voice was beginning to echo in her mind.

It became harder to bring back the heavenly sounds from the recesses of her memory.

Everything about him – except his image she held in the picture frame – was slipping away like sand from her skull. It escaped in the smiles she tried to extinguish when she caught herself being happy without him. It escaped in the rise and fall of her laughter when she saw a little boy toddle towards her with a captured frog in his hands.

One day she may look into the eyes of the little boy and not catch her breath at the sight of the familiar brown eyes. One day. But she knows that when she sees the boy all she thinks about is the man who gave him those eyes.

When the boy plays toy soldiers she horridly imagines the plastic figurines as the man in the photo, with the childish gun sounds replaced by the imagined gunshot in her mind.

The cries of mourning, however, she doesn’t need to imagine.

Feeling the heat of the sun creep onto the floor like a gentle reminder of the coming day, she trades the photo for a storybook – one about a Genie and a princess. She lets the crumpled paper flutter to the floor of the porch, some getting trapped between the cracks and crevices, sinking into the sand below.

The little boy waddles to her side and stretches his arms out – tiny branches for her to grasp and pull toward her.

She begins reading – and, just for a little while, she lets herself smile.

Prompt: “ ‘Ekphrastic’ means art that responds to art…. Put on some music that inspires, haunts, or moves you…Free write to it without an agenda. Experiment with changing the music every 10 minutes – how does your writing change?” from Nancy Pagh’s “Write Moves”

Yet another piece I wrote for my Creative Writing 265 class! I had written this piece in response to the prompt above – instead of following the prompt completely, however, I chose to write this story solely with the use of one song. This particular piece of score (“A Small Measure of Peace” by Hans Zimmer) evoked such strong notes of mourning and sadness for me, and as such I have tried to convey the hopelessness and longing I felt while listening to the soundtrack.

My love for movie scores knows no bounds, and often I hear the score of a movie before I even lay eyes upon the film itself. There is something facinating to me about being able to convey the emotional depth of a scene purely through sound. Hans Zimmer, in particular, has been one of the most celebrated composers in the industry – his many award-winning scores include The Pirates of the Caribbean franchise, Inception, Interstellarand my favourite (although lesser known) score – Spirit: Stallion of the Cimarron.

The score I chose to write on – a piece from The Last Samurai – displays subtle references that build upon Japanese musical styles. Having instruments such as the koto string, taiko drum, and the shakuhachi (a Japanese flute) help to immerse the viewer in the world of 19th century Japan. However, these instruments, without the context of the movie, add a mournful and foreign sound to the unfamiliar ear. This, I believe, further adds to the isolational tone of the entire score clip. In turn, it helped to immerse myself deeper into the world I was trying to create – a mournful widow in a beach house – which was completely different from the world Hans Zimmer composed the score for. This demonstrates the universality of music, showing that no matter the circumstance, the emotions evoked within the listener are just as powerful.

I would strongly suggest reading this piece a second time while listening to the soundtrack, as you may have an inkling as to what mood I was trying to convey. I have linked it below for your convenience! 🙂